The topology where branching nodes are connected with one central device is termed as star topology. A switch or hub acts as the central networking device. The central switch or hub is considered as the server & the outlying devices on the nodes acts like clients. The client server network exists between the central & peripheral devices. 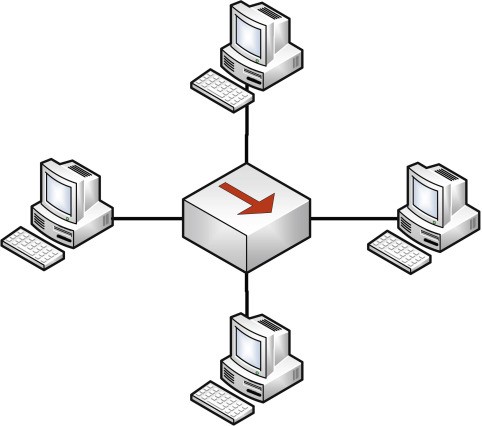 The above diagram illustrates a basic star topology. The center device can be a switch or hub/ router and peripheral computers are connected with it through connecting cables.

Some characteristics features of the topology are mentioned below

The central switch in this topology follows a Content Addressable Memory (CAM) table. The memory inside the switch preserves the hardware addresses of all connected computers. The sender computer sends message to the switch. The switch checks the destination address from the memory & relays the message towards the destination computer.

The reason behind such popularity of this topology is its wide range of advantages. Some advantages are

Apart from goodness, star topology has downsides too. Some of its disadvantages are

Establishment & maintenance of this topology is expensive due to the presence of switch or hub as the central device. In fact, expense also increase due to the increase in number of cable.

Like other network topology star topology has limitation too. Cable length, available ports on the network are some considerable limitation of the topology. In consideration of such physical problem, the star topology extends to multiple stars & ends up having only one central switch or hub in the middle. The central device can be termed as backbone of the total network in network terminology. In such design, the message generated for one system travels to its star’s centre then into the backbone (core hub/switch). The backbone transmits the message to the destination star’s central hub & the central one transmits it to the ultimate destination computer.

Advantages and Disadvantages of Social Media

Advantages and Disadvantages of Internet

Where Star Topology is used

Star topology is thoroughly used in Local Area Network (LAN). Almost all the network installation like small home & offices prefer to use some sort of star topology. In a home network, the users wirelessly connect their cell phone, laptop, tablet, smart TV etc to the router so that they can access the internet.

Bank is an excellent example of star topology. All branches of the bank should configure star topology. The purpose of such configuration is lock down of one branch will not affect the transaction of other branches. In fact to attack on the data of one branch, the intruder needs to work on the central hub first.

The topology works well on smaller networks. Number of cable is high in this topology. Twisted pair cable, optical fiber, RJ-45 & coaxial cable are genuinely used in cabling of the network. Each single computer at the leaf node uses separate twisted pair to connect to the hub or switch. The type of network card chooses the cable connection i.e. coaxial cable or an RJ-45 network cable to join the computers. On using a RJ-45 connector, joining up to 1024 nodes are possible.

Star Network Topology works best in a smaller network. It preserves data on the emergency of network failure. The security issues of switch or hub should be handled with much care & attention. Star topology is really a very comfortable topology to design the network.