Well, as a science background student you should know about neutron, proton, and electron. Again, you need to know more about neutron more because of its’ interesting nature. The scientist has categorized neutron as charge neutral. That’s mean neutron doesn’t have any charge but it has a certain mass in its center.

Neutron mass is not different from the other particle’s mass and you should not mess up weight and mass together.  Weight for an object is defined as the attraction of gravity to the object and mass is the density of the object in one unit volume.  However, the neutron has mass too and it’s about 1.675 x 10^(-27) kg. Do you want to know more? Let’s see what the other interesting information about neutron mass is!

Neutron is a subatomic particle with no charge in it but it has a mass which is greater than a proton (Proton is another subatomic particle). The symbol of the neutron is n, n0, or N0. Neutron was discovered by Sir James Chadwick (A British physicist) and theorized by Ernest Rutherford.

In a nucleus, a neutron stays with a proton in the center. The electron moves on the outer orbital of the nucleus. The antiparticle of the neutron is Antineutron which shows the same magnitude but has an opposite sign.

What is the Mass of Neutron?

Mass of neutron is very important in physics and chemistry. When a bond is created among two atoms the neutron mass plays a vital role there. It may come to your mind that what exactly the mass of a neutron is. Well, we have said earlier that the mass of the neutron is 1.675 x 10^(-27) kg and it doesn’t have any charge. Although electron has the negative charge and proton has a positive charge in an atom.

The mass of neutron in the atomic mass unit is 1.008664. You will be surprised when you will know that the proton and the neutron have nearly the same mass while electron has less mass. Where,

All the atomic mass depends on the mass of neutron and proton. There is another term related to neutron mass and that is electron volt or eV and this is the measurement of the energy. As you know that energy is related to Mass according to E=mc2 formula. In this stage neutron electron volt of 939.56563 MeV (1MeV = 1,000,000 eV)

What are the Examples of Neutron?

If we talk about the neutron example then we should say generally a proton is unstable and it is found in every atom. All neutrons are identical to other neutron and the characteristics of the neutron are all the same.

For example, In Helium atom there is 2 neutron and 2 protons and in heavier element, the numbers are more but the basic and core characteristics of the neutron are same in every atom.

Hope that you have got a clear idea on the mass of the neutron and we tried to give you the basic information about neutron. Still, there is a lot to know about neutron and their characteristics. However, that’s all for today stay tuned for more interesting educational posts.

You can read also

The Charge of Electron

The Charge of Proton with Mass and more. 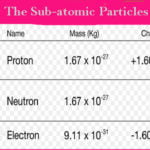 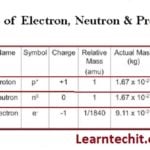