What is Bus Topology?

It’s a kind of network topology where every devices or nods connected to a single cable. And this cable is known as a main cable. It’s also called as the backbone of the network.

For a limited number of computer bus topology gives the best performances. When computers in bus topology exceeds more than a few dozen it decrease the performance level. Moreover all the computers of the topology become unusable when the backbone cable goes offline.

There are some pros of bus topology. Some of them are discussed in below.

Bus topology allows nodes to connect to the network directly without passing through any hub.as a result installation cost is less in initial level.

In bus topology it transmits data only to a single direction.

Bus topology based network use twisted or coaxial cables. This types of cable support to transfer the data at a speed of 10 Mbps max.

In bus topology technology of installation and troubleshooting are widely known and every hardware components are easily accessible.

Advantages and disadvantages of Internet

Like the other network topology bus topology also has its demerits. Some of them are discussed in below.

Though bus topology is a simpler topology, but it requires a large amount of cabling.as a result it causes more spends in cabling.

To identify the exact fault in the main cable, it requires a specialized test equipment. More over when any fault occurred in a main cable then every nodes or devices will face disruption in communication.

If the two nodes send the messages simultaneously, then it causes interference in signal processing as the signals of the two nodes collides with each other.

Difference between Data and information

When the signal loss happened then attenuation occurred in network. To regain the strength of network repeaters needs to generate the signal.

Availability of hubs and switch

When there is no hubs or switches are available then bus topology is used to make a network topology.

When the number of devices or computers in a network are not fixed then bus topology is used.

The failure of one nodes does not affect the network then bus topology is a perfect option. 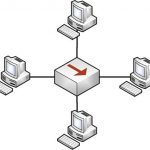